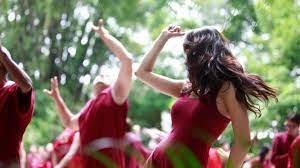 A very ordinary girl from a small town I am, just like your next door neighbor – went on to complete my studies from a reputed convent, graduated in Psychology. Groomed by the family women to get married into a well established lineage, how were they or I ever suppose to know what was in stored for me.

My journey dates back to the days when I had recently moved to a metro city to take up a job as the Child Project Officer. I distinctly remember the first day I entered my new office, I was warmly welcomed by the director herself & over tea was explained the significance of developing a macro-view for life & in due course she lightly talked of ‘karma’…… karma, the last time I heard this word was by my grandmother in her pujas. Why was this super modern woman, an extraordinary orator talking of age old karma belief system? I could not understand & neither did try to put in much effort to do so. I was there to work in the school programs & have my bit of fun in the Capital City.

The initial office days were heavy for we were in the run for applying for state funds & approval letters. Eventually there was some respite & we got to visit some state run schools, but no soon had we begin and there were some other red tapism to hamper my child project from taking off. I helplessly was trying to save my job & dream of being a successful independent single working woman. In the midst of it all there were certain other major changes taking place in the administration of my workplace, adding more to my anxiety. I was asked to meditate regularly & was put on a Catharsis Meditation. These meditations did help me a lot at least to be a mighty quick decision maker. I was given an option to travel around overlooking other projects and hop I was gone!!!

I traveled for a little while & was gaining more insight into what my boss had been talking about – meditation, karmic imprints, energy fields, higher beings. All this began to make sense as I entered the Ashram. And then for the next 2yrs I made my base at the feet of my master. Learning, Releasing, Developing, Re educating, Loving, Growing, Making friends. From there I moved way ahead in life. Since then I have had much more healthier relationships, traveled across world, worked in exchange programs, am wiser & wealthier.

However daily I Surrender.

Surrender to the universe, to the higher realms, to the only one truth. He says in Surrender there is no time limit & no demand.

Hence I Surrender… … to U, my master. And I keep treading along the unknown path… …